The Enduring Lure of the Durrells In the Durrell Spot shop, in Corfu town, you will find for sale 2 small books.  My Family and Other Animals (the first book in The Corfu Trilogy) by Gerald Durrell and Prospero’s Cell by Lawrence Durrell. These 2 books have never been out of print in the 70 odd years since they were first published and have formed the basis for TV adaptations such as the recent ITV production “The Durrells”. It is strange that the lives of an English family, on an extended stay in Corfu during the 1930’s, should still maintain such a grip on the public imagination, 90 years after the event. 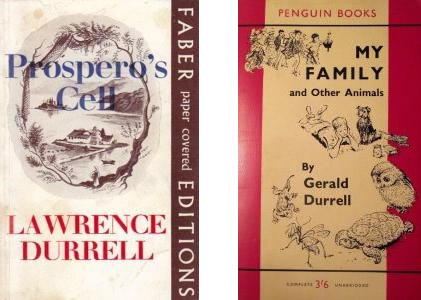 Why is it that the events and landscapes evoked by Gerald Durrell, as well as the lyrical descriptions of his brother Lawrence, are so enduring and enchanting?

There are two key reasons for this enduring popularity. The first is a nostalgia for a “lost golden age” – an age that predates the rapid and overwhelming changes of our current societies. A time before technology invaded our lives with cars and TV and mobile phones; a simpler, maybe more truthful time. Secondly, it is the attraction of a world seen through the filter of another’s eyes. In the case of Gerry, these are a child’s eyes, attuned to newness and wonder. Moving to Corfu for Gerry was like being reborn. Even in Larry’s writing in Prospero’s Cell this simpler, youthful view is to an extent true; we are encouraged to view Corfu through the hopeful, glittering eyes of the young poet in love. To share and experience the shock and delight of the new, as both Larry and Gerry saw them, is what grips us and enchants us in the retelling of their stories. It feeds our desire for escape into the lives of this eccentric family, on an island of wonder.

Both writers cleverly exploited this desire to escape by painting word pictures that draw us into the magical landscapes of a sun-drenched Greek island, populated with characters that are realistic and recognisable but also undeniably larger than life. Gerry writes often of colour – he is hugely cinematic, projecting vignettes of life in 1930’s Corfu onto our imagination.  Gerald recognised this image-making effect of the island on his own brain too. In My Family and Other Animals, he writes:

“I found myself prey to the most curious sensation of unreality. It was rather like being born for the first time. In that brilliant, brittle light, I could appreciate the true huntsman’s-red of a lady-bird’s wing case, the magnificent chocolate and amber of an earwig, and the deep shining agate of the ants.”

Who among us could fail to be captivated by this description and indeed, who could fail to desire to experience this awakening of the senses for themselves? This is why many of us come back to the writings of Gerry Durrell again and again; the confirmation that to see as a child is to see with wonder. 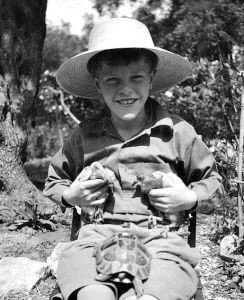 Lawrence also seemed to have experienced something of a rebirth on the island. It was here that he was free to explore his artistic talents, writing the Black Book and making the notes for Prospero’s Cell. His life on the island was simple. He lived with his then wife Nancy, in the ​White House at Kalami​, a house described as becoming ​ “…our unregretted home…”.

Lawrence too, despite his description by Gerry as ​ “… a small, blond firework…”, ​revelled in the ‘sense of being’ that he found on the island. 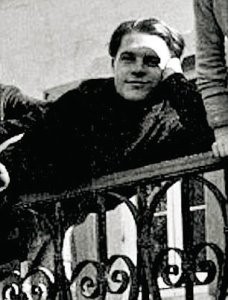 Writing, painting, sailing, swimming – the pursuits of indolence and creativity are described beautifully in Prospero’s Cell and transport the reader to a magical world of youth and vigour and romantic love. Lawrence evokes for us the hope and optimism of the young man at the start of an exciting adventure. That the hope and optimism are dimmed at the end of the book by the looming clouds of war, only underpins the clarity of the vision in the book. We are left at the end with a sense of nostalgia and of loss, the loss of innocence of

as he wrote in a later poem. The diary style of Prospero’s Cell pulls us into living the life of Larry and Nancy in a first-person manner; we are encouraged to immerse ourselves in Larry’s life in Corfu and to live it with him and Nancy. This is the enduring charm of his book and also Gerry’s – that we can live, vicariously, a life beyond our own, full of colour and eccentricity.

However, we must recognise that there is also a darkness hidden in the books. A darkness that acts as a shadowy counterpoint to the light and innocence and colour of the world conjured for us by Gerald and Lawrence.  Both books were written in hindsight, after World War 2 had wreaked havoc on Europe, including the many terrible events across Greece. The war looms quietly but persistently over both books conjuring a sense of loss; loss of innocence, loss of freedom, loss of family and friends and the loss ultimately of that short innocence of youth. As Gerald writes in the final chapter of Birds, Beasts and Relatives (the second book in The Corfu Trilogy),

“Lulled by the wine and the throbbing heart of the boat’s engine, lulled by the  warm night and the singing, I fell asleep while the boat carried us back  across the warm smooth waters to our island and the brilliant days that were  not to be.” 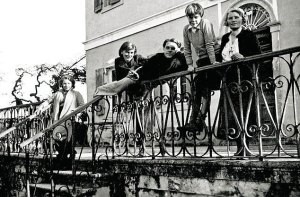 Those days that were “not to be” conjure the loss of youth, innocence, and the joy of Corfu to the onward march of World War. There is a gentle sadness in these words that hopefully makes us pause, think, and pledge that such dark days should never be allowed to return.

For Gerry, the end of his time on Corfu resulted in a move away from the  island,  to grow up and struggle his way to a position as owner of a zoo and  recognition as a great conservationist, For Larry, it was a constant search  for love, for recognition, and a striving for fame – but with a feeling that he  was always looking over his shoulder and regretting the loss of those bright  days as an ‘Amateur in Eden’ with Nancy.

And so, the writing of the Durrell brothers endures, both in print and on screen. It endures because the Island and the life on it that they conjured is indeed a magical one. It is a mindscape full of wonder, colour and certainty, counterpointed with just the right amount of darkness and loss that leaves us gasping in awe and wanting just a little bit more. In visiting Corfu, it is easy to come expecting the romantic visions of yesterday to be true today, and this can be the road to disappointment unless we travel with the right mindset.  What was true for Larry and Gerry can be true for us today; we

create our own landscapes of the mind. Corfu is many things for many people. Whether it is for escapism with sun and sea aplenty or to follow in the footsteps of Gerry and Larry by focusing on butterflies, walking, photography – everyone has their own version of the Island. 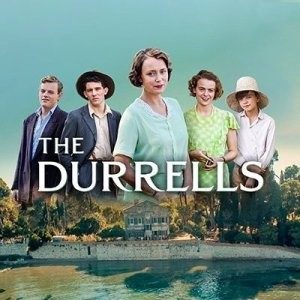 If, however, you are enticed here by the writing of Gerald and Lawrence, or the recent TV series “The Durrells”, the Island will always be The Durrells’ Corfu. What better way to indulge in your own Durrells’ Corfu experience  than to have a meal or stay at Lawrence’s former home, ​The White House  at Kalami​ and to delve into all things Durrell at The Durrell Spot shop in  Corfu town?

Written by Will Cullen